Until this point cherished registration plates were not as abundant as they are today. When DVLA Number Plates in Swansea first issued the “A” prefix number plates in 1991, it opened up a huge opportunity for people with the more popular initials to now buy the personal number plates that were so difficult to find up to that point. Initials such as MJB and DJW were now widely available for sale however thousands of them were snapped up by knowledgeable dealers and investors who were quick to see the opportunity of a profit. 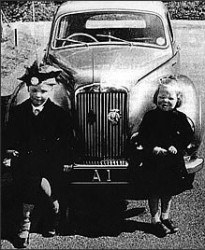 Nowadays we consider cherished number plates to be the personalised registrations that were issued before 1963. That means the style that does not have a year character or indicator to show when the plate was issued by the then called DVLC.

Have a look at the image of A 1, which is the first number plate ever issued, and you can see exactly what a cherished registration number looks like. They are often referred to as dateless registrations although they shouldn’t be confused with Irish number plates which also have no year letter indicator.

Plates for sale such as AB 2367, MW 9 are classic examples of this type of car registration. As they are significantly older (and some can be over 100 years old now), these car registrations have a much higher market value than the usual prefix, suffix or new style number plates that are common place on today’s busy roads.

In fact, the most expensive private plates that have been sold over the last 10 years have virtually all been of the cherished number plate style. Number plates such as F 1, M 1 and S 1 have made well over £300,000 and The Private Plate Company themselves sold B1 for over £200,000 back in 2006.

As you can see, cherished number plates have been exceptional investments over recent years. You can find many thousands of these dateless number plates on our website in the DVLA auction results sections.

If you should want to know how to sell a number plate just complete our online form and we will advertise it FREE of charge for you within 24 hours. We are a recognised reseller of DVLA reg plates.

Hi, I’m Katherine. If you have any questions about buying, selling or even finding a personalised number plate, then please give me a call on 01639 888833. I’m on hand to give you help and advice.

For added peace of mind, we can manage the legal re-registration of your private number plate for you, with an expert member of DVLA’s transfer team, including reissue of your new V5 and arrangements for the road tax change.

Consider our benefits before buying elsewhere!